Moses and the passage of the red sea

Moses and the passage of the red sea

MOSES AND THE PASSAGE OF THE RED SEA 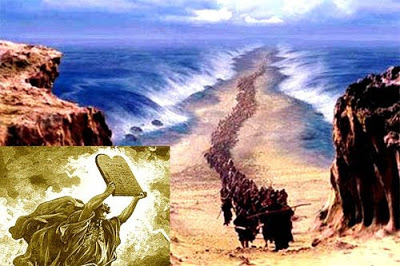 THE TRUE STORY OF THE RED SEA PARTING

Interlocutor: Now I’d like to ask about Moses and the Tables of the law. Is it an entire invention?

Johnakan Ur-El: No, it is not an invention. The fact happened. Moses had communication with the Eloah Jehovah, and the Tables were perfectly sculpted by Moses, this thing was no extraordinary event because it was the custom of that time to record the laws and other facts.

The Tables of the law were a self-centered communication from Jehovah, where he asked to be worshipped.

Interlocutor: I understand. And the famous "the thorn bush burned with fire” Was it Moses invention perhaps?

Johnakan Ur-El: No, because Jehovah had the power to make it, in the same way that angels made you visualize in your mind many things.

Interlocutor: Who was in fact Moses?

Johnakan Ur-El: Moses was a Spirit of Light of the 5º plane, but he had many doubts and, well he ended up subjected to Jehovah.

Interlocutor: Is he incarnated at the moment?

Johnakan Ur-El: No, he is not. Moses was such a higher entity that he wanted to save his people, although selfishly, because he loved them possessively. Jehovah appeared before him many times, but in a very self-centered way requesting homage, and he doubted many times because he had another idea of what A God should be in fact.

Anyway, let us remember the time, and let us remember that Moses, being incarnated, even though his Thetan was in the 5 vibration plane, he didn't stop being a very rudimentary person in many things, and suddenly an image appeared before him and tells him imperatively how he should proceed and then of course he was going to obey.

Interlocutor: How about the famous parting of the waters of the Red Sea, Was it real? I ask it to know if there was extraterrestrial intervention.

Johnakan Ur-El: No, there was no such parting of the waters. There was a time of severe drought though, where there was a lot of dry land and little water.

Interlocutor: That is to say that nothing miraculous or magical happened then? No “Divine power "power or extraterrestrial "intervention?

Johnakan Ur-El: That’s right. This is one of the many things in which people have fantasized.

Re: Moses and the passage of the red sea

MOSES AND THE PASSAGE OF THE RED SEA

Interlocutor: The first question is related to the Red Sea crossing by the Israelites when they were pursued by the Egyptian army. I wanted to ratify that there was no extraterrestrial intervention. A While ago, when I asked, you informed me that there was no extraterrestrial intervention, but in that time the Essence didn’t give authorization to reveal the participation of the aliens yet.


Johnakan Ur-El: In fact, Moses didn't cross the Red Sea from one end to the other, but simply on one of the slopes, where this sea begins. In that summer there was a severe drought and they could cross it.


Interlocutor: Did the Egyptian army pursue the Israelites almost marching after them as the Bible says?


Johnakan Ur-El: No, it was not like that. It was not that as soon as the Israelites crossed the Red Sea, the waters covered immediately the Egyptian army. There was more or less a day of difference between the Egyptians and Israelites. Later on there was a great storm that provoked a rise in waters and the Egyptian army could not cross.

Interlocutor: Did some Egyptian soldiers drown?

Johnakan Ur-El: Correct, in their desire to capture the Israelites they tried to cross and the alluvium dragged them. Their ego was stronger than their wisdom. They said to themselves that it was not possible that they could escape out of their hands... These are areas where in 24 hours a great tide can take place...

Interlocutor: In this case, then, and to summarize the point without any doubt, there was no extraterrestrial intervention...